Is the approach of managing water through a community system dying?

I am, at my very core, a centrist. No matter what subject, taking an extreme position at one end or an other rarely works. I like to describe this fondly as living in a world of grey, however bleak it might sound to an outside reader.

I apply this ethos to almost every aspect of my life (much to my families dismay). So it is no surprise that I applied this lens when noticing the ever growing number of predictions of how the US water market will consolidate and privatize. I think this is an over simplistic view of the market and even bordering on dangerous.

Many proponents of consolidation and privatization cite the baseline qualitative improvements on water quality when water schemes are taken out of public hands. There is no debating the facts on this and Britain is a good example of how this plays out over an extended period. But this approach is not without its challenges. Fines are being levied at an unprecedented level and there are a litany of accusations regarding shareholder dividend preference over consumer health. I think it is useful to ask, why does privatization work?

I like to think of best in class water management a bit like Maslow's hierarchy of needs. At the very foundation, you need the infrastructure delivering water services to be fit for purpose. Privatization enables relatively quick access to capital and competitive rates which is hard to argue against. Next is labour expertise. High quality engineers and scientists are accessible to the consolidated entity that would ordinarily not be the case. The next layer is professionalism. Studies repeatedly show that privatization empirically increases the level of professionalization in a water utility. This is measured against compliance, efficiency, economics and risk. The piece de resistance of best in class water management is holistic community engagement. 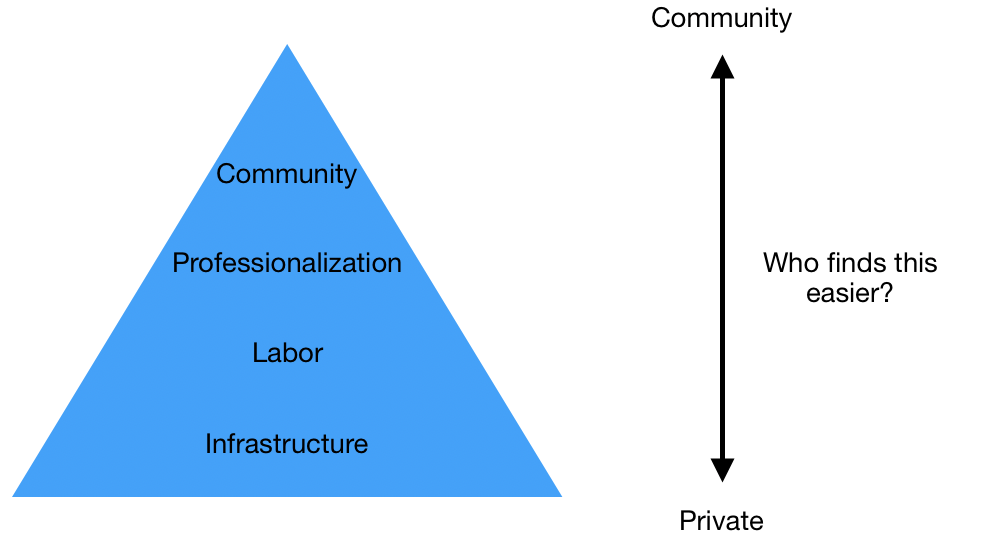 What is most interesting to note is the holy grail of community management is extremely hard for private entities to achieve as the objectives of a private utility and the community are in too stark a contrast.

Which leads me back to my love of the grey zone. How can we get the best of both worlds in all of the above. The jury is still out on infrastructure. The question of approaches like federal or state rotating schemes, Public Private partnerships (PPP), Design/Build/Operate (DBO) etc. are too complex to delve into here. However the middle two tiers can be solved with software. The issue is absolutely not that the staff are unqualified or not adequately motivated but more that given the nature of the community system, simply put, the users don’t have the volume of experience that a big utility would have. Software like CRP solves this as the collective experience of the sector is continually refined in a single platform to give insight where issues occur that have never occurred before. Technology is becoming cheaper, both software and hardware so things that were ordinarily unavailable to community systems are now cost effective. It also addresses the area of professionalization as the best in class processes and tools are being used by the smallest to the largest utilities, again driven primarily by the lowering cost and accessibility to a wider market.

I believe the only way to effective community involvement in water is engagement with a community driven organization. The objectives and mission of the utility must be deeply rooted in the community if they are to be trusted by stakeholders in the watershed that are typically at odds.

It is for this reason, I come down in the grey area when the debate of privatization comes up. I don’t think exclusively one option or the other works. However, I do believe the best in class systems will be those that are community managed with deep ties to, and reliance on, aspects of privatization such as PPP & DBO. It feels terribly like a politicians answer but the major difference is I actually came down on a side!